The Word of God dictates the dynamics of civilization over history and dominates the destiny of events. It is our privilege as souls and individuals to participate and contribute to the inaction of God’s Will in the history of humankind as it unfolds, if God accepts such service. In order to serve, it is important to know what God’s Will is; and in order to know God’s Will we would have to recognize where to turn to learn it. Historically, humankind has known and worshiped God through His Manifestations– the Authors of the great world religions.

Religion was created for the betterment of the world, to inculcate kindness and patience in human character. Religion teaches us to have faith, which empowers people to transcend attachments to selfish and material things that often motivate harmful behavior. As the latest chapter in the unfoldment of religion, the Baha’i Faith redeems and contextualizes all past religions, like Christianity and Islam that came before it.

Because the Baha’i Faith affirms other religions and prescribes the uniting of all particularistic worldviews, it is worth bolstering and defending against ignorance and prejudice. But fanaticism in Iran has caused the Muslim clergy to persecute the Baha’is. In a similar way, materialistic fanaticism through consumer culture has questioned beliefs at the core of religion in the West, such as the value of spiritual life and the need for Prophets or even faith in God.

Wherever they are found, fanaticism and fundamentalism are a harmful fire in the heart, that can be very detrimental to others and to the peace and security of society. Take for instance the violence between ISIS and the Shi’ih people of Iraq. For the Baha’is of Iran, and the people of Iraq, it is comforting to know that God sees the pain and suffering that religious fanaticism has caused and heals, exalts, bestows, and rewards those who endure and overcome it with patience and courage. Perhaps, one of the greatest condemnations of those who benefit from crime, both violent and moral, is the manifest implication through behavior that shows they actively embrace a philosophy that regards social justice as their enemy. The fanatic thwarts himself, in demonstrating desperation.

In the Tabernacle of Unity, Baha’u’llah teaches that we can protect ourselves from fanaticism and fundamentalism by remembering that there is only one God, and that his Word influences the world through the Revelation of successive Prophets or Manifestations of God over the ages. This concept is termed progressive revelation–the belief that humankind has experienced a single phenomenon called Religion (singular) comprising all the various world religions revealed successively over time by God’s Will for humankind in a socially and  historically-appropriate manner.

To endure fanaticism and fundamentalism, Baha’u’llah teaches, we can pray to God saying, “aid me with the ensigns of Thy power and might” and “protect me from the mischief of Thine enemies who have violated Thy Covenant and Thy Testament.” Baha’u’llah says that this prayer acts as an “impregnable stronghold” in that it confers protection and can be likened unto an “indomitable army” in the way that it ensures deliverance.

The Baha’i International Community was shocked to hear of news that Iran’s Revolutionary Guards have begun excavation in a historically important Baha’i cemetery in Shiraz. The site is, among other things, the resting place of ten Baha’i women whose cruel hanging in 1983 came to symbolize the government’s deadly persecution of Baha’is.

“Reports from Iran came in yesterday that the excavation has begun and graves are being destroyed. Some 40 to 50 trucks are lined up to remove the earth and accelerate the work,” said Bani Dugal, the principal representative of the Baha’i International Community to the United Nations.

“We are urgently calling on the international community to raise its voice in protest at this disturbing act.

“We also appeal directly to Iranian President Hassan Rouhani to halt this act of desecration.”

Reports received so far indicate that workers for the Revolutionary Guards had completed an excavation some 1.5 meters deep and 200 square meters in area. The hole is near a number of very old gravesites in the western part of the cemetery but is not yet deep enough to have disturbed the remains, it is believed.

Ms. Dugal said the local Baha’is had made appeals directly to the Revolutionary Guards asking that it construct the proposed  building on the areas of the site where there are no graves – and turn the areas with the graves into a green space, leaving the dead undisturbed.

“Appeals were made to various city and provincial authorities, including the commander in chief of Revolutionary Guard, the municipality of Shiraz, the Friday prayer Imam, the governor of the city, Iran’s prosecutor general and the head of the judiciary, with no results,” said Ms. Dugal.

Owned and used by the Baha’is of Shiraz since the early 1920s, the site was confiscated by the government in 1983, at which time its grave markers were leveled and its main buildings destroyed. Its ownership has since changed. Three years ago, the provincial office of the Revolutionary Guards announced it had taken over the site, and a sign was posted indicating that it planned to build a “cultural and sports building” there.

Some 950 Baha’is are buried on the cemetery land.

Among the prominent individuals at rest in the cemetery are the “ten Baha’i women of Shiraz,” who were hanged on 18 June 1983 at the height of the government’s campaign of execution against Baha’is. Between 1979 and 1988, more than 200 Baha’is were killed in Iran.

The ten women, who ranged in age from 17 to 57, were convicted of “crimes” such as being “Zionists” and the teaching of children’s classes – the equivalent of “Sunday school” in the West. Their wrongful and dramatic execution drew condemnation around the world. After their sentencing, for example, US President Ronald Reagan issued a plea for clemency for them and 12 other Bahá’ís who had been sentenced to death.

During their trial, the ten women were told that if they recanted their faith, they would be released. “Whether you accept it or not, I am a Baha’i,” replied 28-year-old Zarrin Muqimi-Abyanih. “You cannot take it away from me. I am a Baha’i with my whole being and my whole heart.”

The youngest among them, Mona Mahmudnizhad, only 17 at the time of her death, has been immortalized in songs and videos. Her conspicuous innocence and brave demeanor in the face of death made her – and the nine other women – international symbols of Iran’s harsh repression of Baha’is.

Attacks on Baha’i cemeteries have been a common feature of the persecution of Baha’is in Iran in recent years. Between 2005 and 2012, at least 42 Baha’i-owned cemeteries were attacked in some manner.

These attacks, often carried out with implicit if not direct government support, have involved the firebombing of mortuary buildings, the toppling of gravestones, the uprooting of landscape shrubbery, the spray-painting of anti-Baha’i graffiti on cemetery walls, and the exhumation of bodies.

https://www.bic.org/news/destruction-historic-Bahai-cemetery-Shiraz-Iranian-Revolutionary-Guards
Mona Mahmudnizhad is one of ten Baha’i
women buried in the Shiraz cemetery. 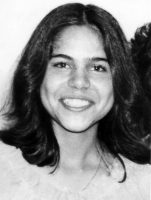